Today this blog turns 10 years old. I didn’t have anything special planned for this occasion so, I thought I’d just give a quick update on what’s going on.

My game is progressing rather well, despite strong discipline on the way I’ve been working. The game is a rather simple (and classic) shoot’em up were every idea is stolen. Enemies come from the top of the screen in waves. The movement of the players ship is based on an old coin’op game I remember playing once and only remember it through its Finnish name Sukkula. The ship moves like it has a mass and inertia. If anyone recognizes this game, inform me about it’s proper name and be rewarded.

The amount of enemies will grow untill the end of time / until you run out of memory. This idea comes from an old Amiga game Datastorm (1989), in which the number of enemies gradually increased from level to level, until your machine was unable show them on screen, which still didn’t deter the game from pushing more enemies to the game.

The players ship produces certain amount of energy which can be distributed to shields, weapons or thrusters in various ratios. This idea is of course from the original X-Wing (1993) from LucasArts. This is what I call a Light Tactical Element (LTE). I’d like to have more LTE’s in the game, but at this stage I’m more interested in getting something finished. With Computer Games, you can always improve and re-work your stuff.

That’s the gist of it. I’m close to releasing the first playable version of it.

A new year is upon us and in another year, a new decade as well. I had this crazy idea to try and write on my blog every single day something, anything, for the coming year. Instead of making up my own mind, why not ask the more essential people (=bots), you, the supposed readers.

What do you think? Should I take it upon myself to write something on this blog for every day a whole year?

I met a friend at the shop and being such intelligent and well-thought young men we quickly engaged in some deep discussion about this-and-that. One subject we touched was blogging and the why of it. I explained that I don’t treat my blog as a diary and I certainly hope that none reads it like one. I certainly write for me, but with being aware that anyone at any point in future might read it.

If I were more logical and sensible I wouldn’t blog at all, for that reason alone. Whatever you will write will be misunderstood and -treated. Why take a risk like that? For the time being, for most intents and purposes, this blog doesn’t exist. That might change in the future but why bet on something like that? Blogging gives me an ample leverage to battle those nincompoops who insist that everything that exists has to be carefully recraft in Facebook. I have yet to come across ANY argument from them to join Facebook, just the amazement that I don’t, that this won’t, either, be a reason in itself for the foreseeable future.

So, why on Earth do I blog? I positioned myself up against a rather good question. Of course the real reason is exactly the same why people use Facebook, greet others, call other people with derogative names and wear provocative clothing. It is to get some (any) attention.

Memes have been all the rage since their invention some 2 million years ago. Internet memes have been even bigger rage since Al Gore invented them along with Internet itself back in the late 80’s. You don’t really exist in the web (i.e the Real World) unless you have enough eyeballs consuming your webpresence. The way to gain those is to become a part of a meme.

Usually this works by being either incredibly stupid, self-destructional or brilliant (preferably on camera). For us who don’t own a camera there’s one option left. This.

When I was a kid (4-5 years old) on one Independence day when there were fireworks displayed, I thought the NÃ¤sinneula-building, a landmark of Tampere, was a space rocket about to launch into space. Yes, I actually thought that Finland had a space program of it’s own. Boy, was I stupid!

Not too long ago, I attended a cinematic event. Now that I can actually afford them I’ve grown to dislike them more and more. My biggest gripe are the advertisements. I’ve payed dear money for the priviledge and then they see it fit to show me probably the finest concentration of tripe known to man. Some of the ads are obviously mean’t for radio. Thats multimedia for you.

In that sea of meaninglessness something caught my attention as I was hoping to see Tropic Thunder instead. It was an ad for some jewelry which was apparently an improved version. Thus it had “2.0” added to its brand name.

Internet, I’ve known since my Blog began in it’s present form that the name was already a tired joke and that there would be a time when even Stephen Colbert would announce that it’s done. At that moment, in that movie theatre, when that deep voice claimed the reason for naming that jewelry something + “2.0” it was clear to me that now was that time. It’s time to get back to basics.

Bemmu was kind enough to let his inner photomanipulator surface and came up with a, I’m guessing, a signature picture for my blog, pictured below. 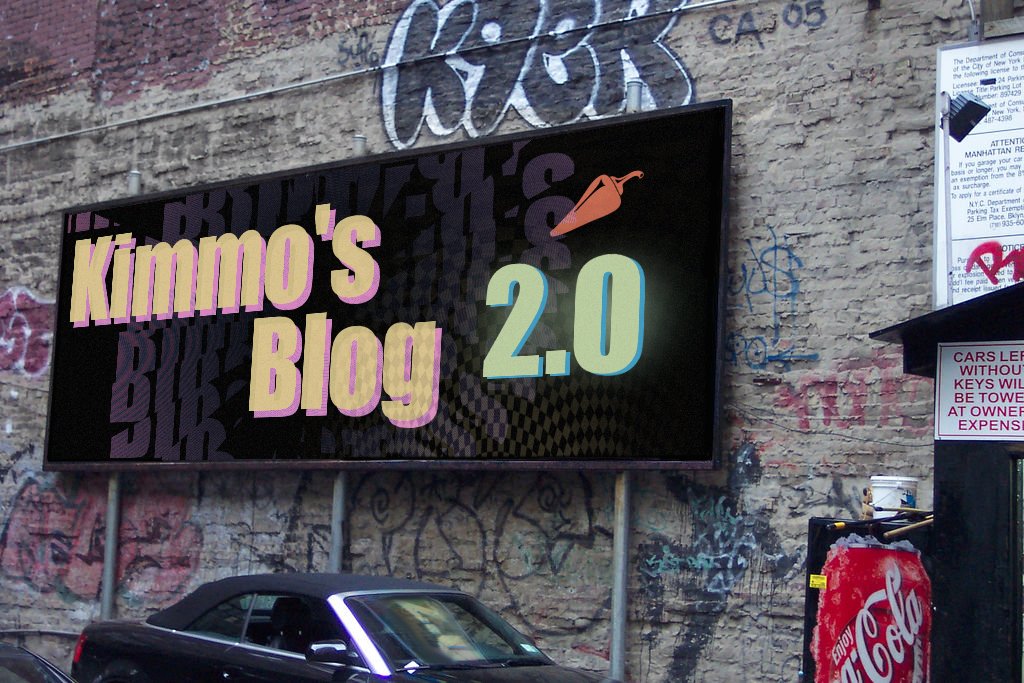 I appreciate the effort AND the connection to the 5th. but I have to admit I prefer my Blog looking as it is. But I’ll buy you a coffee for the effort.

It was exactly 5 years today that this Blog began its existence as a simple HTML-page on my University of Tampere pages.Â  The idea of a “blog” was presented to me the previous fall at a New Media studies course by a prominent Finnish game researcher, Aki JÃ¤rvinen. This proves nothing but that I’m slow.

The beginnings were more than humble and being first (or among the first) doesn’t mean a thing. My blog was left to the fringe when more controversal, better and more frequent writers took the stage. Pinseri hosted an official Finnish blog-list. I had some pleasure watching the relative position of my blog flactuate. Long term movement was firmly DOWN. I held to a belief that my chosen language was a reason for my poor numbers in readers. This belief was hamppered by a Finnish blog with a better standing that was written in Irish…

The bulk of my readers have been people who already know me from other venues of life, usually from academia. One interesting, yet small group of readers has been prospective employers. Now, I can’t prove anything, but I find it plausible that there’s at least one instance when the attitude of a prospective employer has gone several degrees colder after someone for her organisation had read my blog.

This blog has, in spite of everything, seen one self-proclaimed fan. For me there is no way to defend from this kind of attention, even taking in consideration all kinds of circumstancial matters, I have to admit, if I may, that, Katja, for this reason only, you hold a special place in my heart.

5 years is a short time for almost any kind of human project, for a blog it’s almost a lifetime. Technical, social and numeral matters in the blogosphere have changed immensely. I guess that the subsequent progress from now on will be something a lot different. I have felt somewhat priviledged to see the beginnings of this chaotic and influential and chaotically influential media.

This blog is getting close to being 5 years of age and I am in careful ponderance what kind of celebrations would be adequate for this occasion. Being in so long slumber has drained me from practically any human readers, so I am thinking I would get free with just getting drunk personally. On the other hand I did promise to bring about some kind of festivities e.g. a year ago.

So, I throw the proverbial ball to my potential human readers, would you like to see some kind of party arranged to celebrate the five years of this blog? And more so, would you attend that party? Let me know, there’s a comment ability to this blog you know!

Even the bots among you can answer, if you can motivate why you like me so much…